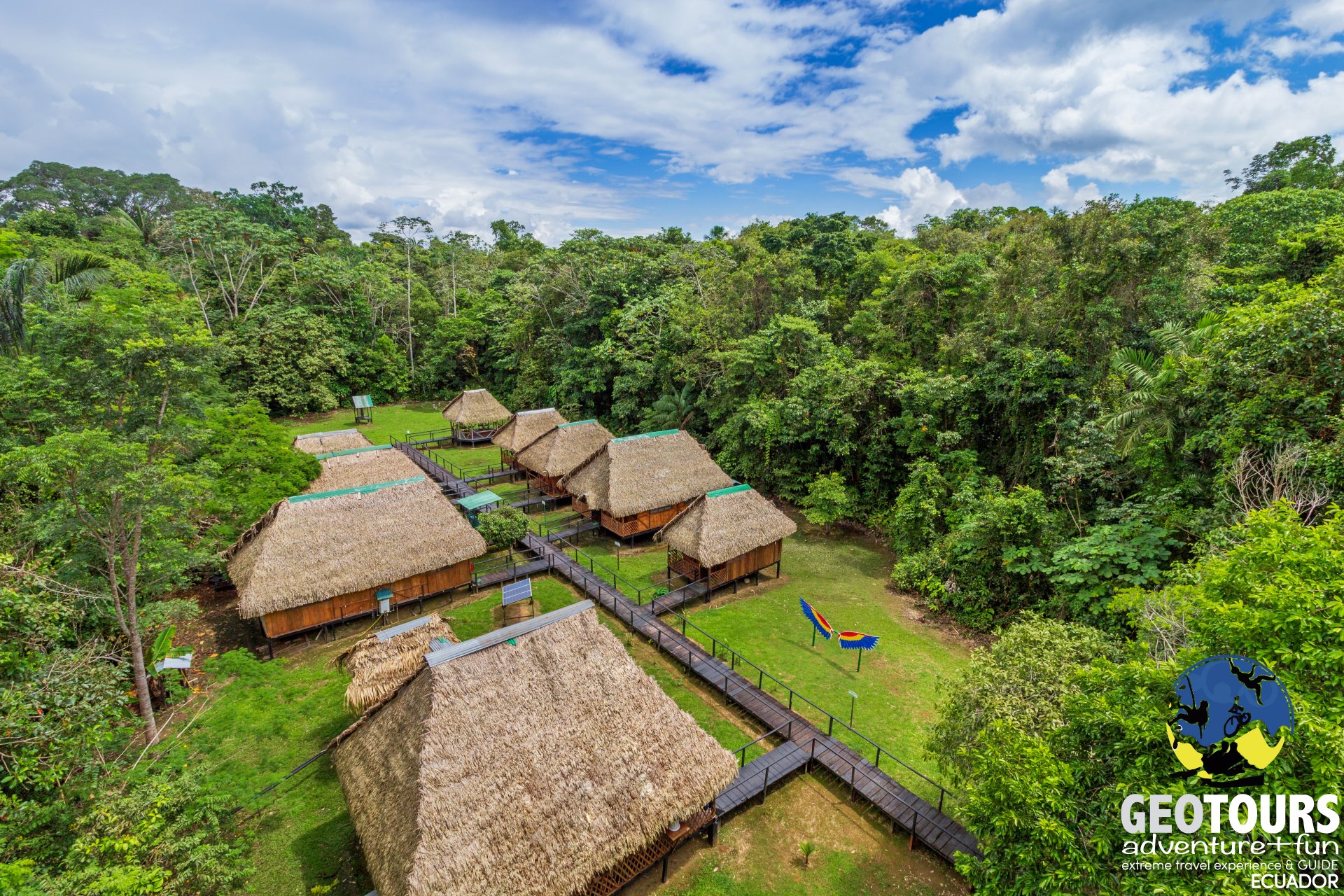 Geotours is Green Forest Ecolodge in Cuyabeno.....Explore a wonderful place of the Ecuadorian Amazon rainforest on our 3 days tour to Cuyabeno ... See more 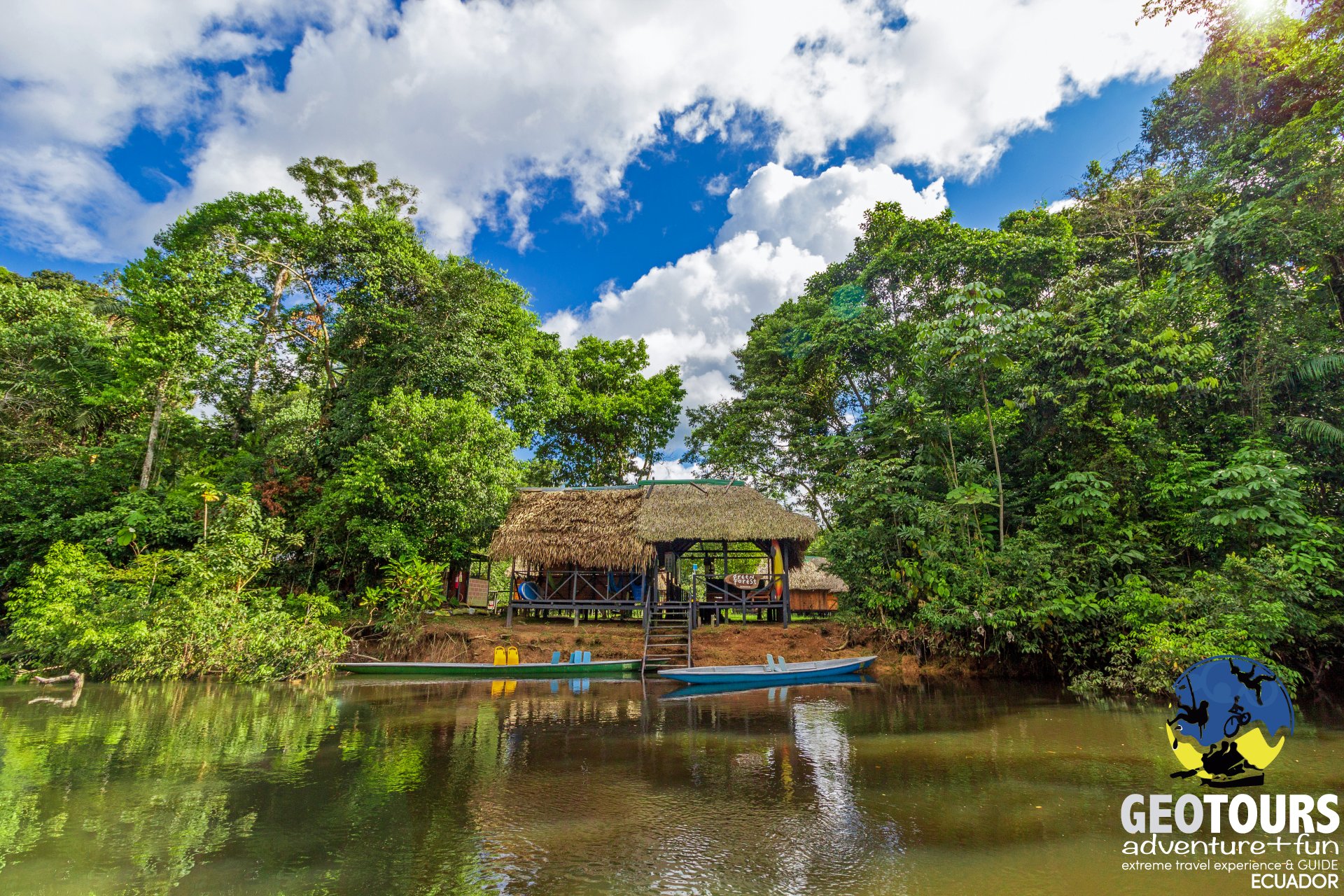 On our 4 days tour to Cuyabeno you'll enjoy fun activities in the middle of the Ecuadorian amazon rainforest ... See more 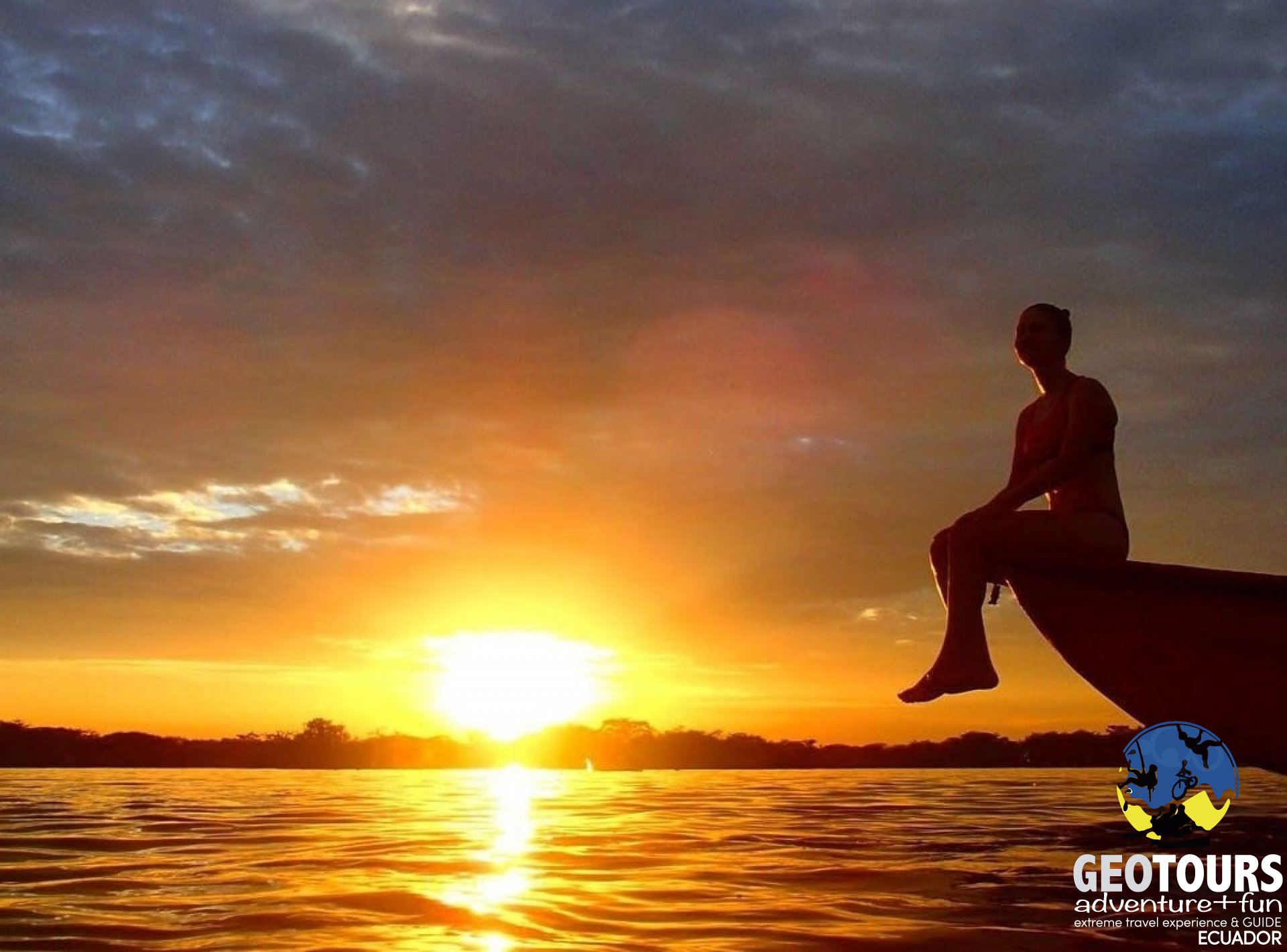 Our 5 days tour to Cuyabeno offers a great range of activities, flavors, ancestral knowledge and experiences you can only live with Geotours. ... See more 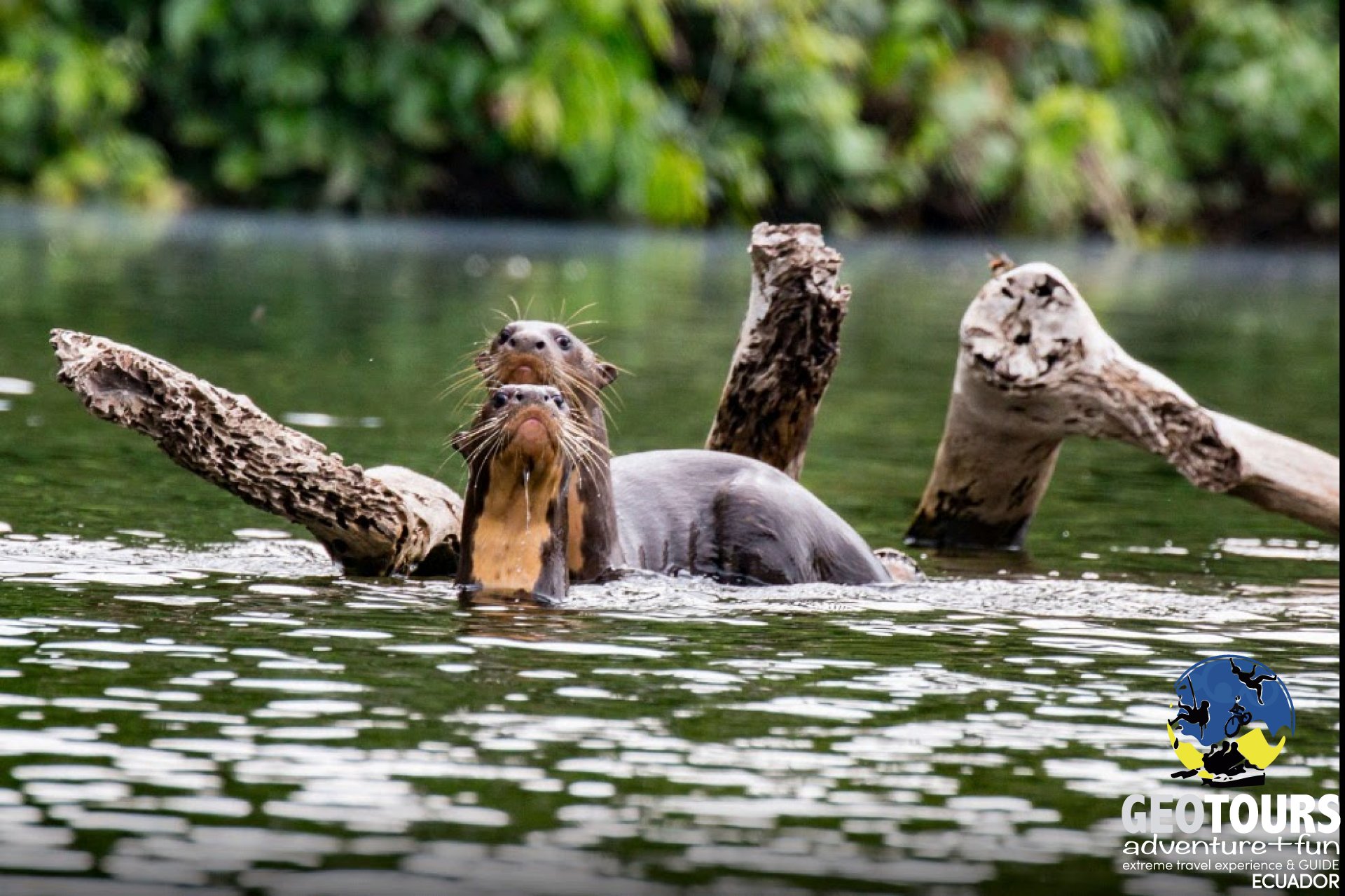 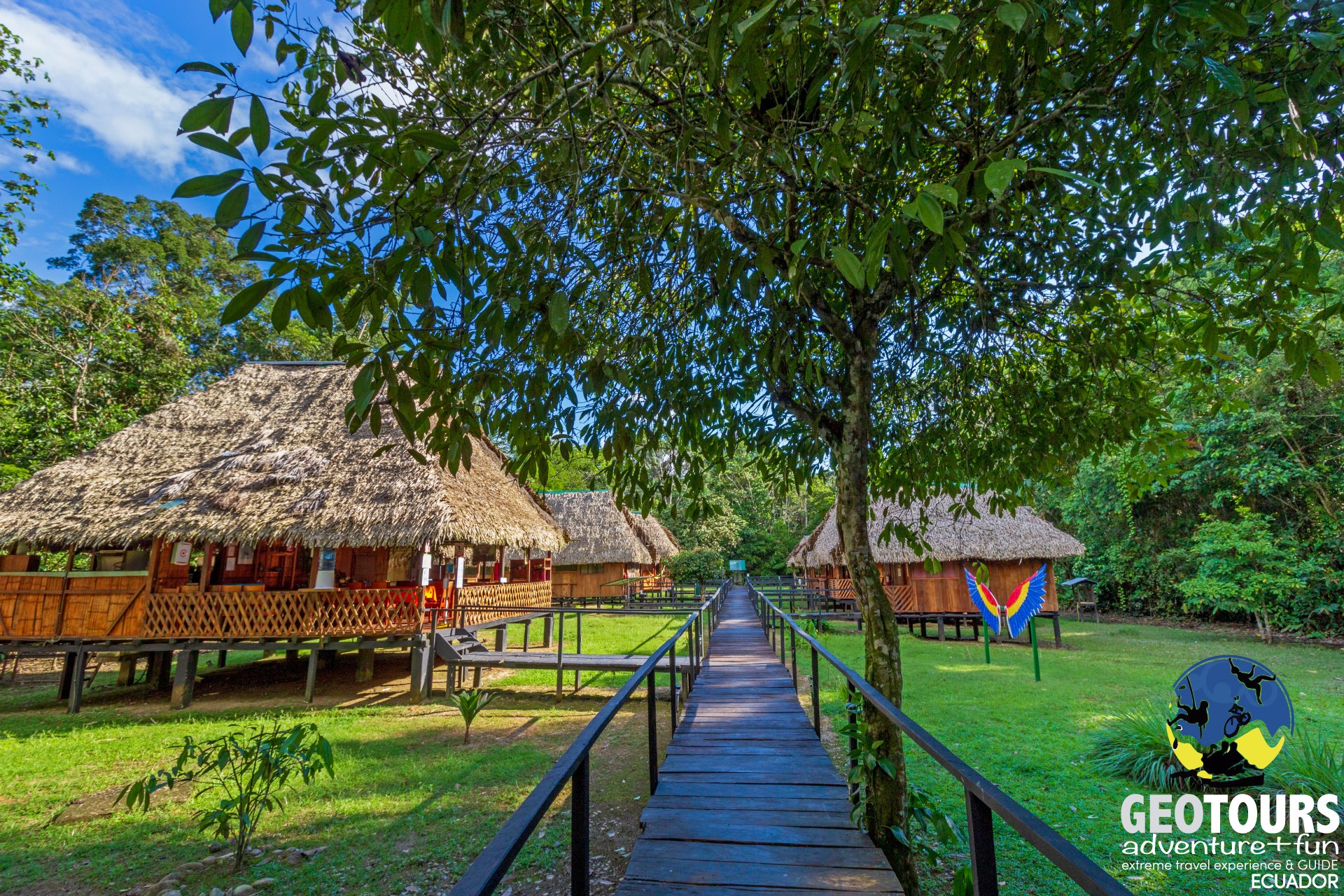 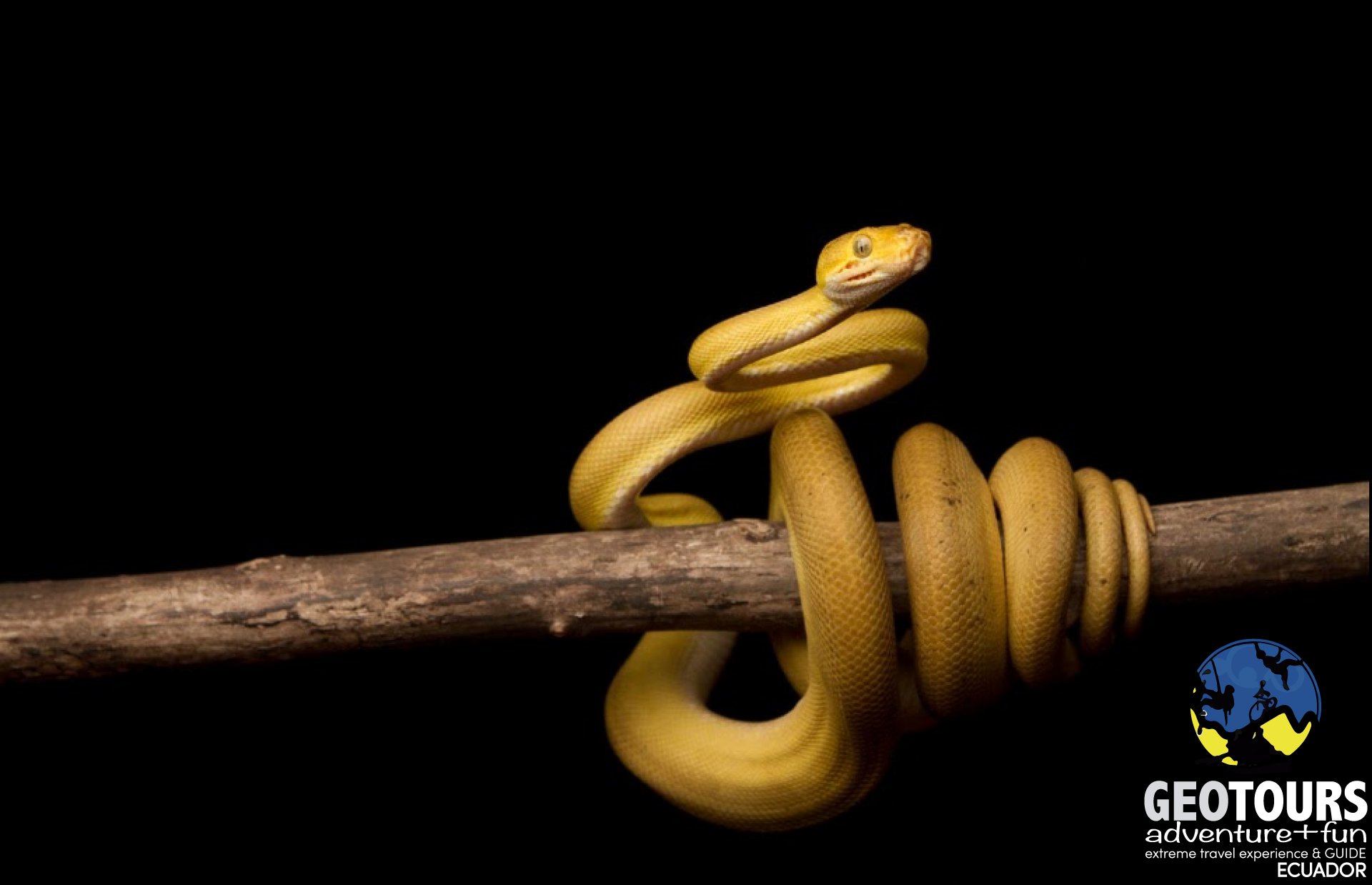 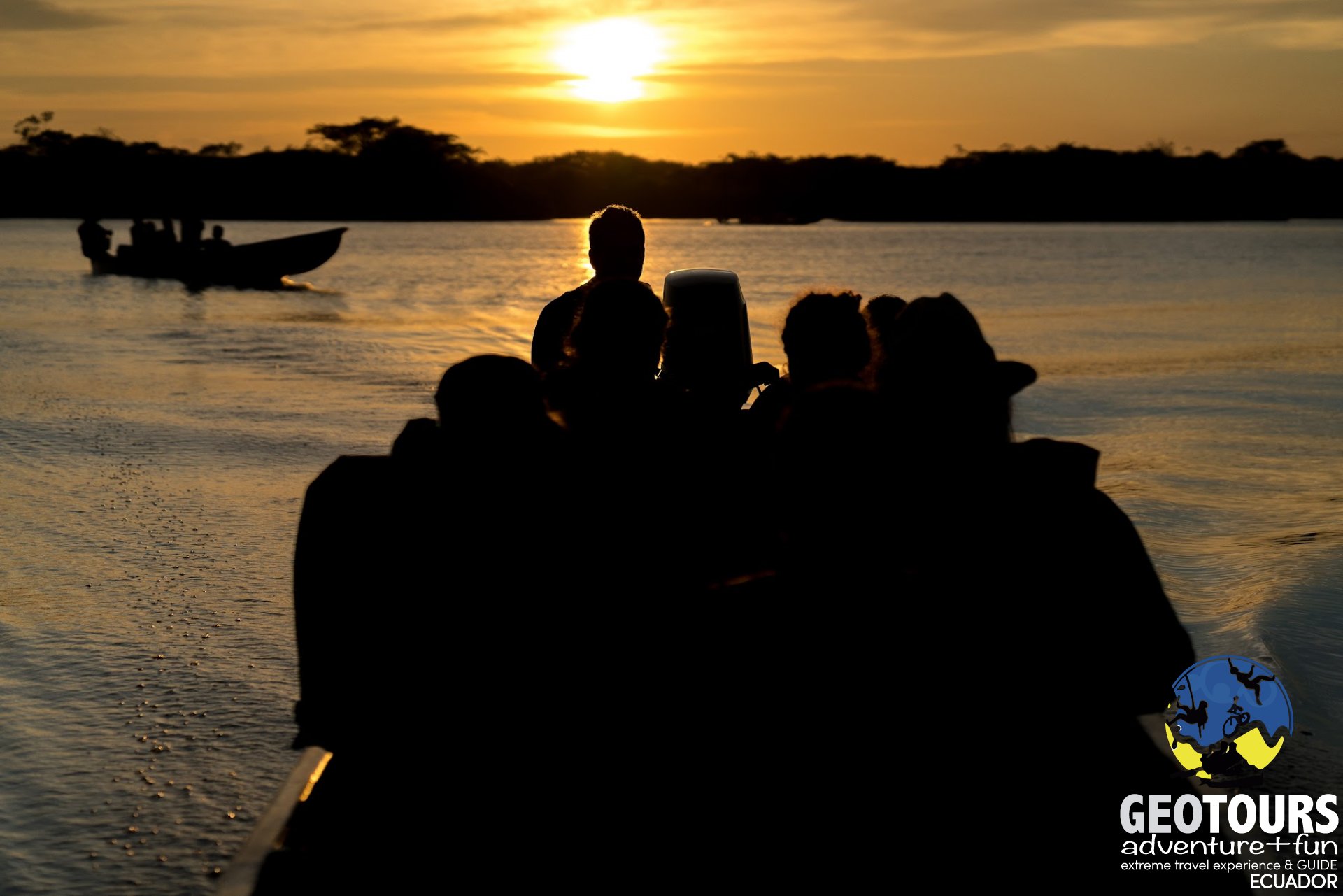 The canton of Cuyabeno is considered an intangible territory, since it is within the Cuyabeno Fauna Production Reserve, having innumerable places of great tourist potential considered as the first ecological canton of the province.

Cuyabeno is an interesting canton for ecotourism; it offers jungle tourism, and offers crafts in a house-museum. It is a highly organized canton and is ready to guide you through its paths in the forest.

The Cuyabeno Fauna Production Reserve is a place with great biodiversity, home to one of the largest concentrations of wildlife, both in flora and fauna. A complex system of rainy formations, 14 lagoons, rivers and a tropical forest that make the 603,000 hectares a record in terms of the highest levels of biodiversity in the world.

The Reserve is also home to rare species, such as the mythical pink river dolphin, the Hoatzin or eagle of the region, with its eight-foot wing opening.

Since the Cuyabeno Reserve belongs to the National System of Protected Areas, very few Tourism Operators are qualified to work in this area. This is one reason why there are not many tourists visiting the area, so you can enjoy nature and its magnificent sounds.

In its western part, the reserve starts at the foothills of the Andes, but we quickly enter the Amazon plains. There are two very flat floodplains, where you can find interconnected lagoon systems: the first is where the Laguna Cuyabeno (or Grande), the other on the border with Peru. Originally, the reserve only incorporated the entire basin of the Cuyabeno River, but with its extension, includes parts of the Aguarico and Putumayo Rivers. The terrain outside the plains consists of firm land on generally very low hills.

Due to the conditions that Cuyabeno provides, one of the main uses of the reserve is Ecotourism, both by private companies and by the residents of the sector, one of the main attractions of Delfíncocha since it offers the ease of swimming with the dolphins.

The pink dolphin, or river dolphin is a species that lives exclusively in rivers, lagoons and freshwater pipes of the Amazon basin. It can be found in shallow waters during the flood season, when its habitat is filled with trees and plants that are part of the forest floor, creating an interesting obstacle course through which the dolphin must move when going in look for its prey. For this reason the pink dolphin is more flexible and slow than the dolphins of the ocean.

The pink dolphin feeds mainly on fish and can occasionally eat mollusks and crustaceans. This species seems to prefer to prey on solitary fish than shoals.

Legends of the Pink Dolphin

It is believed that the pink dolphin can live close to 30 years, but the data about its life period are still little known. There are no known records of predators for this species, however in the Amazonian region there are some legends that can endanger their lives.

It is believed that this animal, on full moon nights, gets any woman pregnant that enters the river while in her fertile period.

Another legend says that on full moon nights when there are parties, the dolphin transforms into a man and goes to parties to seduce the women of the region, all dressed in white and wearing a straw hat to hide the blowhole. And it is believed that any woman who walks by the river in a canoe at the time of her menstruation, will one day receive a visit from the dolphin that will get her pregnant.

Because of these legends pink dolphins have been credited with the paternity of all the children without a father in the region and it is said that in some cases there are children registered in the notaries as children of the dolphin. For this reason the men of the region in many cases try to end the life of these animals because they do not want them to get their women pregnant.

Among the species that stand out the most are: orchids, heliconias and bromeliads. They present a high diversity of, ferns, morete or canangucho, cordoncillo, lips of black, chambira, spear point, chuncho, pambil, tagua, balsam, palms, ceiba, sani yura, guarango, bamboo cane, shimbillo, matapalo, ungurahua, palo de cruz , quince or python, cat's claw, huito, drago blood, mountain onion, toquilla straw, ribs of Adam, sanango, ayahuasca, balsa, copal, among others. In addition to the tree of lemon ants, whose hollow branches are inhabited by these insects that produce a citric acid, protecting the plant from possible predators.

Among the most representative primates we can mention the leoncillo or pocket monkey, the black or yellow hand trunks, plovers, howler monkeys and barquis.

Aquatic mammals such as: pink dolphin and giant otter.

Among the most important species that live within the area are: macaws (red and green) that can live from 30 to 40 years; pechipunteado carpenter, corotozul momoto, piquiliso garrapatero colonizing bird of open areas, turkeys, masked tanager, toucans, big kingfisher, pygmy kingfisher the smallest of the kingfishers, harpy eagle, crested eagle, aligris trumpeter, golicastaña colaespina, piquigrande seedbed , pechinaranja falcon, among others.

Fish: Studies of the Aguarico basin indicate that there are 475 species of fish; the highest diversity of species than any other basin in Ecuador. The most represented species are white piranha, paco a large fish that is characterized by having a double row of teeth very desirable for its meat, and sabaletas.