Traditions of the Holy Week in Ecuador

In Ecuador we celebrate Holy Week from Palm Sunday until Easter Sunday, dates that are counted 40 days after Carnival. In this 2019 they coincided on the dates of April 14 until April 21. This week is one of the most representative of Christianity with deep commemorations of its parishioners. In each region, city and part of the country, it is celebrated in a diverse and colorful way. Among other things they have religious rituals, parade, and passion and religous games  are performed.

To enjoy in Baños de Agua Santa, a city full of adventure and adrenaline, we have several options to enjoy as a family. We leave you some options of our tours that you can take.

In the country we have many traditions which are fulfilled during Holy Week. Among the best known we have: visit the seven churches, prepare the Fanesca (a typical dish), and the largest procession in the country of Jesus of the Great Power.

The days of  Holy Week

Holy week consists of 8 days, during which Christians commemorate the Passion, Death and Resurrection of Jesus Christ. Holy Week was the last week of Christ on earth. Each day has its own religious ritual. The events per day according to the current interpretation of the biblical data are:

Fanesca is a traditional dish to eat during Holy Week. This soup is prepared with dried cod and 12 different grains. It is said that the fish represents Jesus and the 12 grains represent the disciples. The ingredients of the Fanesca are: pumpkin, zambo, beans, chochos, corn, peas, porotos or beans, rice, onion, garlic, cumin, achiote, peanuts, milk, cream and cheese. You can also add some vegetables like potatoes and plantain.

The tradition is to eat the Fanesca on Holy Thursday, like The Last Supper. However, the dish is known to be prepared nationally, during the whole week and that's why you can get it all week in several restaurants.

It is usually served hot on a plate and it is traditional to decorate it with pieces of cod, whether cooked or fried, salt doughs in the form of empanadas, threads, or small balls. Also fried ripe plantain, red chili peppers, parsley leaves, fresh cheese, a piece of white onion and slices of boiled eggs.

Although at present there are variations in recipes to satisfy the tastes of diners.

Procession of Jesus of the Great Power

The procession of Jesus of the Great Power is a 50 year old tradition. Around 250,000 thousand people go to the streets in the center of the city of Quito, in Plaza San Francisco. The procession lasts until three in the afternoon, the time of the death of the Lord. The descent is made at six o'clock in the afternoon, when the day ends for the Jewish community.

The cucuruchos, along with the Veronicas, are traditional characters that accompany Jesus of the Great Power and the Sorrowful Virgin in this journey that begins and ends in San Francisco and that covers a good part of the Historical Center of Quito. The whole city and the streets are filled with purple.

The Cucuruchos symbolize the penitents who show their repentance and their willingness to change and want to vindicate themselves and begin a life free of sins. The Veronicas are the representation of the courageous woman who made her way through it, to wipe the sweat and blood from Jesus' face with a cloth that would have been miraculously engraved on the cloth by the Holy Face. The cloth of the Veronica would be one of the relics that is considered vera icon. 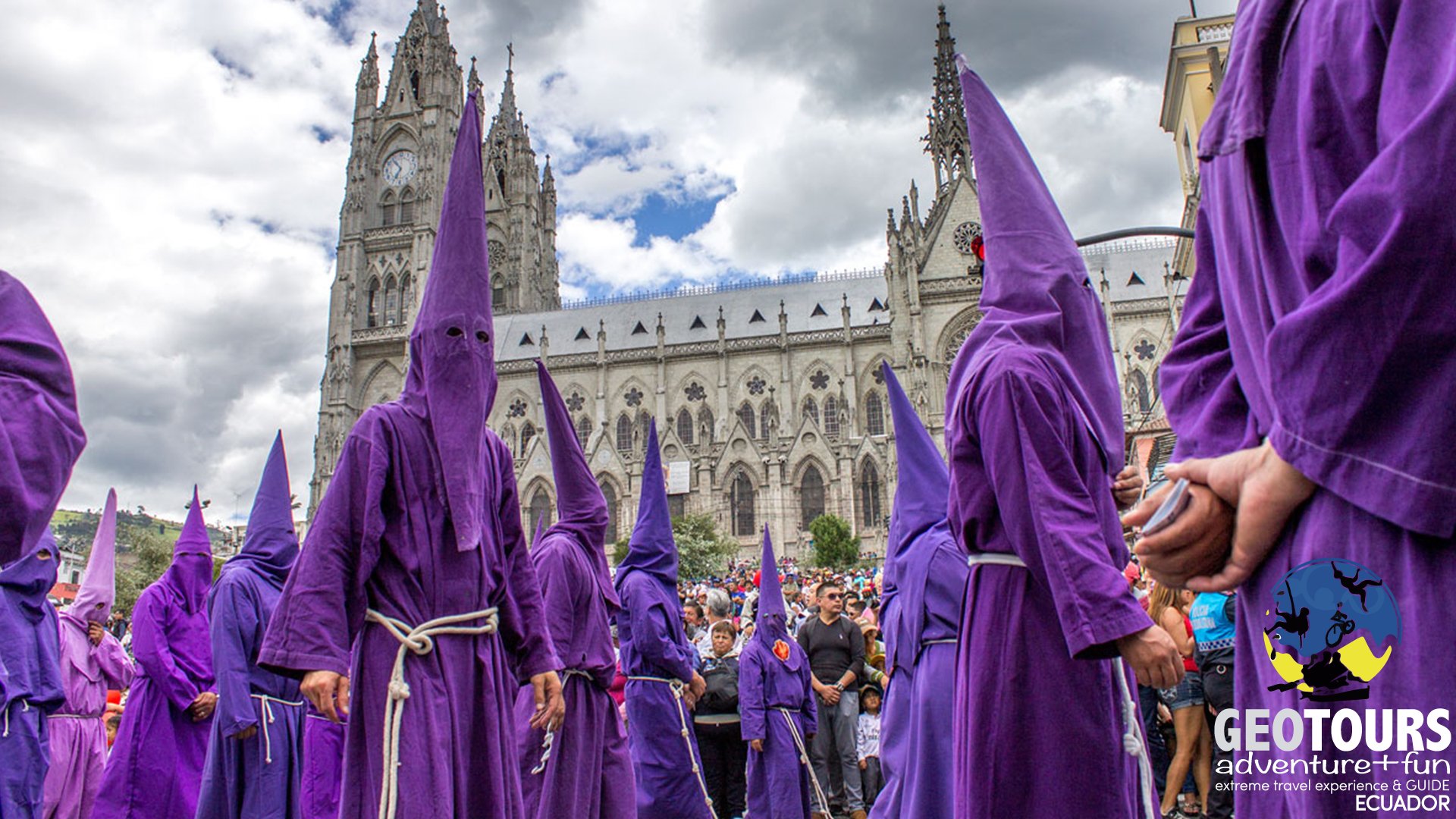 The tour of the seven churches

The tour of the seven churches officially takes place on the night of Holy Thursday. This is one of the most common traditions of Holy Week throughout Latin America. Commemorated here are the seven journeys that Jesus made.

Some think that the journey is made by the seven words that Jesus pronounced before he died. Others think that these visits symbolize the accompaniment of the faithful to Jesus in each of their journeys from the night he was captured until his crucifixion.

The meaning of each of the 7 routes are:

This Holy Week you can also visit with devotion in Baños de Agua Santa. Visit 7 crosses which are distributed throughout the city. On each cross you will find one of the seven words that Jesus pronounced before dying. These words are: 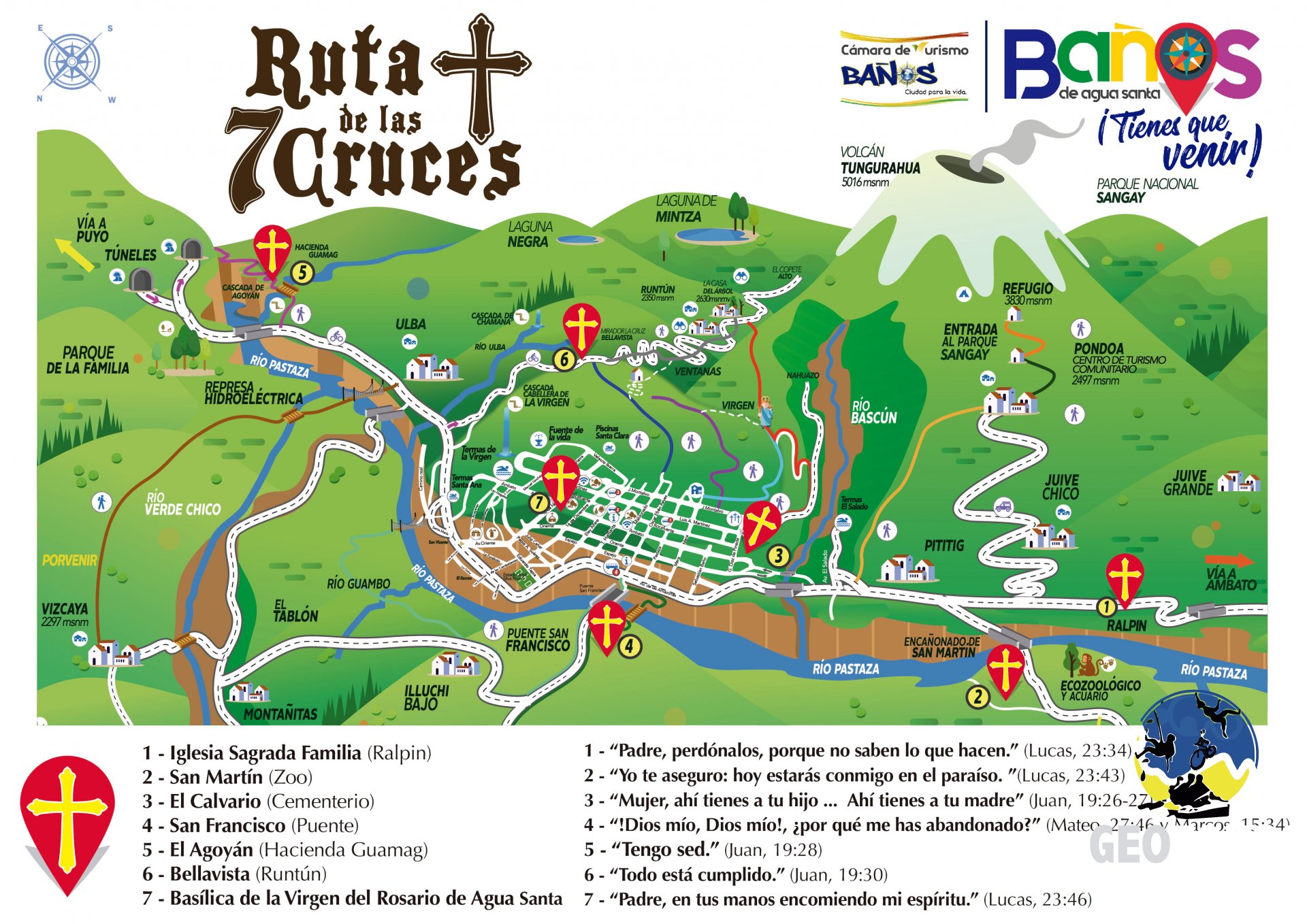